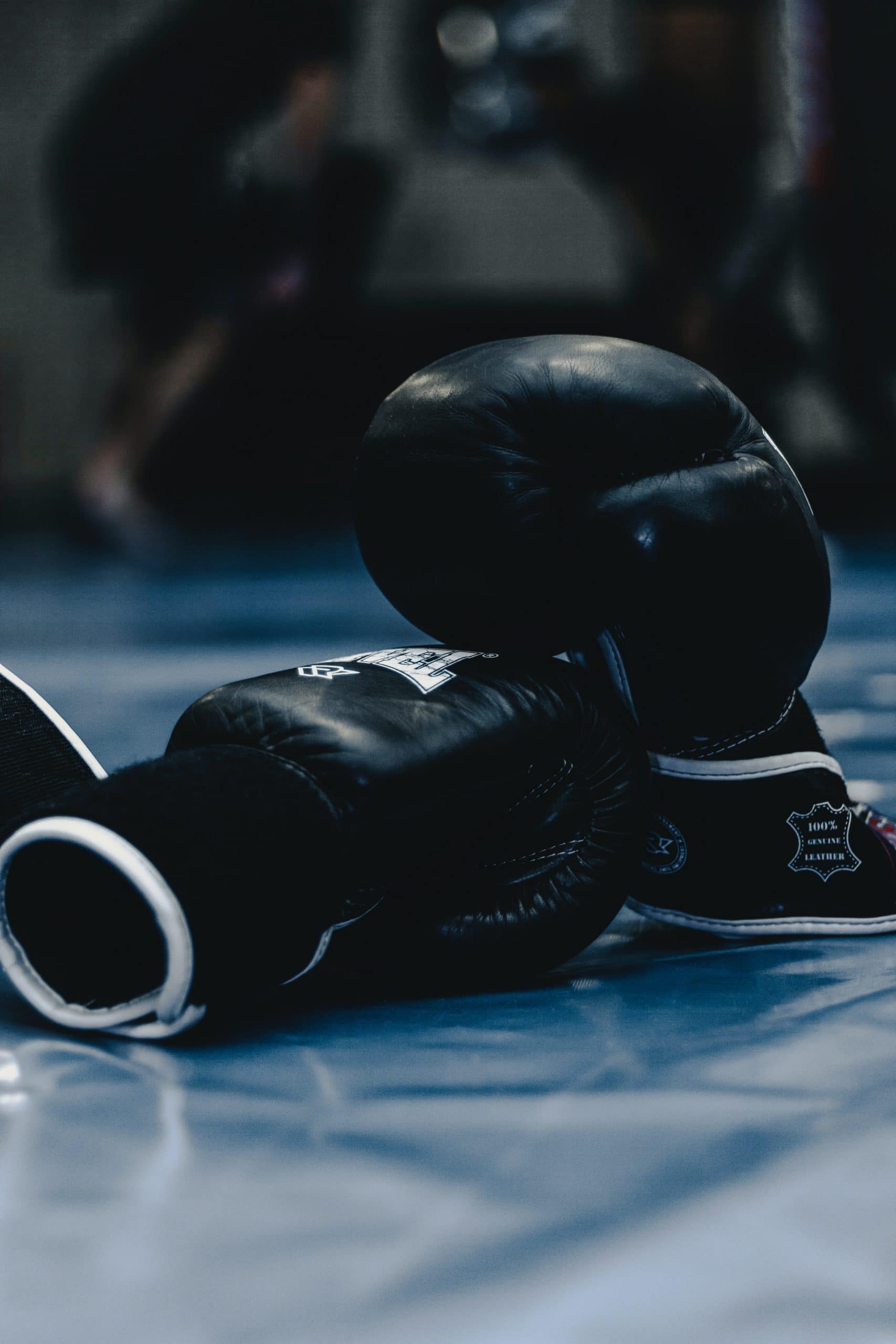 Everybody has a story but this is one story that I feel honoured to tell. Who would have thought that a chubby little kid from Alphabet City in New York would have enough courage and determination in his soul to persist until he achieved his goal of becoming a professional Mixed Martial Arts (MMA) fighter and esteemed personal trainer (PT) to a celebrity and high profile client base in London?

I hereby present to you – Richard. J. Edwards (Richie) aka N.Y. Shogun. With a professional name that derives from the legendary de facto rulers of ancient Japan, Richie has demonstrated undeniable fervour in his journey, literally personifying his associated tagline #hustle.

Grinning from ear to ear, I am instantaneously focused on Richie and his incredibly infectious laugh and warm persona. We talk for what feels like an eternity and I am so drawn in to Richie’s tales of his struggle, determination and gratitude and genuinely excited to share my account of these with you.

Growing up in the 80’s, sharing a neighbourhood with Madonna and Keith Haring, at a time when hip hop, basketball and boxing were all the rage, was no mean feat for little nerdy Richie – who had no natural skills in any of these arenas (his words, not mine!).

It was dangerous; nestled between China Town, Spanish Harlem and Seaport, during a period where drugs and general crime were rife, you can understand why Richie was sheltered by his parents and prevented from walking the streets unchaperoned. He never played sports, wasn’t particularly cool and tended to be quite solo in his endeavours.

So, how was he inspired?

Funnily enough, breaking his wrist a day before commencing school, resulted in an overnight stay at the hospital where he met his first best friend, who sported a black belt in karate – JC. Renowned for being the toughest kid in town, Richie was mesmerised by the fluidity of his kicks and swift movements and pleasantly surprised at how patient, caring and loving he was. Sadly, JC had an asthma attack and passed away a few months on; however, meeting him was instrumental to the start of Richie’s journey.

The Dojo Brothers and the whole Metro All Stars karate team (run by Hector Santiago, whose daughter attended the same school as Richie) were present at the funeral, so an acquaintance was formed. For those of you, like me, who are not familiar with this scene; remember the Ninja Turtle movies – well, these are the guys beneath the suits in the first movie way back when!

So, JC’s legacy lives on…Richie went on to join White Tiger Dojo, which he describes with a glint in his eye was like ‘training with superheroes’, as he never felt he was the fastest or strongest contender.

A young kid, with a lot of heart and passion, he went on to take hits in the hope that one day his dreams would come in to fruition.

The karate school eventually shut down, Richie’s dad was sadly diagnosed with cancer, and that was when he stumbled across the boxing room. There was nothing glorious about this journey, about getting your ‘ass whooped’ in sparring sessions by some of the best boxers in the NYC amateur scene. But, persist he did.

It was a long path to reach the point where he progressed from boxing to fighting professional MMA.

Richie was at Printing House for a couple of years, training how to box.This was when he met Sebastian Taylor – body builder and a brown belt in Brazilian jujitsu, who presented him with the fighting scene in Japan. Having someone believe in him was a powerful motivation and watching endless videos of these fights was imperative, with training opportunities sparse, as no gyms would promote the MMA industry (it was still perceived as taboo and considered to be ‘like human cock fighting’).

Only 24 years old, with no experience, Richie plucked up the courage to trek to Boston for a UFC try out show, competing with 500 fighters. Another knockdown – a torn MCL (medial collateral ligament) injury from round one didn’t deter him. Funnelling through the pain, knee supported by duct tape, Richie hid his mishap and continued to compete. He didn’t get through but the devastation just fuelled more determination.

I am inspired. I have never met someone with so much fight and passion – the resilience to keep going and never give up.

Fighting took over and became his obsession and it was at this point he decided to go professional, packed his bags and moved to Boston where he trained for a couple of years with the elite.

A lot of introductions later and the connection with J Silver was formed. Richie chuckles memorably as he tells me how he was made to complete a 5 mile run then went to the gym for a sparring session. Bearing in mind he was a feather weight and J Silver was a heavy weight, he was lured in to a 10 round cage fight and, with burning lungs and laboured breath, he refused to be defeated. Finally, a breakthrough; poached by the Gold Team fighters, he stayed there for 3 years.

From NYC to London

So, how did Richie end up here – in sunny London? Like all great stories, it started with a woman. With what was meant to be a two week trip 11 years ago, funded by the air miles of doting colleagues, Richie landed in The Big Smoke and never looked back.

He trained with Team Titan, now known as GB Top team, and still does to this day. From falling in love and uprooting his life to moving half way across the world, Richie ran classes at The Fight Factory in Purley and competed and won Essex cage fighting championships.

The past year has been difficult for everyone and MMA fighting has also ground to a halt. With the last tough fight against an opponent that was 20kg heavier than him, despite his age, Richie is keen to get back in the cage.

Having always been a PT parallel to training and fighting, Richie has run classes at gyms and also privately. Holding pads for some of the best fighters in the country most definitely paid off, as it affords him the tenacity to be able to offer 30 minute non-stop sparring sessions!

Inspired by the highest ranking warriors in the Japanese army, Richie lives by the Shogun code of conduct, morals and willingness to die for what you believe in. His overpowering mentality, where giving up has never been an option, is gripping. The years of struggle and hard work led up to now, and he beams with such positive energy and appreciation, which is so admirable.

Like myself, you are probably wondering what Richie’s next goal is. With the intent of reuniting the community by showing strength, he has plans for Pop up Events (exercise classes) later this year. In tow with a fitness podcast with James Arthur, which is currently under discussion, there is a lot of excitement ahead!

If you enjoyed reading about Richie’s journey, be sure to stay connected by following him @n.y.shogun on Instagram and visit https://newyorkshogun.com/ for any PT enquiries.

If podcasts are more your thing, watch this space for my follow up interview and training tips session with Richie, which is coming very soon!

1. Ask yourself – what do I want? Forget social media and family/friend influences and focus on what YOU are trying to achieve.

2. Once you’ve figured this out, make a plan! Consult a PT, get some direction; you may just need a programme or plan to follow and not a PT.

3. What makes you happy? Find workouts that are actually a bit tough and challenging but also excite you. Going through the motions and then feeling demotivated afterwards is just a waste of time and energy.

5. Eat well – portion control, meal prep and be aware of your consumption

6. Be mindful. Meditate, find ways to relax and switch off

7. Refrain from the usage of steroids, diet supplements or engaging in crash diets. Be conscious to make a lifestyle change that is healthy but also makes you feel good

For Richie, this lockdown felt the hardest. With no end in sight and the post-Christmas slump looming, he made the decision to create content and share a 28 Day Boxing Challenge on Instagram for the month of February.

With feedback from clients, friends and followers insinuating that they were fed up of regular body workouts comprising of burpees and the likes, he felt that boxing would be teaching a different skill set whilst also being a great release for those that engaged.

Breaking down the fundamentals of boxing that he teaches in private training sessions, the collection of free short reels posted during the month were a massive hit. Filmed by talented friend Mehrad Keroyan (Instagram @mehrad_k01), they were ecstatic at the response. Even though Richie only has 1,400 followers on Instagram, one of the videos received a whopping 49,000 views.

In conjunction with this, long term client, X Factor winning singer and songwriter James Arthur, engaged with Richie where they went head to head remotely competing with calorie burning workouts. It is evident that Richie’s ethos ‘I never see what people do, I see them for who they are’ is paramount in his approach to socially connecting to provide motivation during this testing time.

Let’s get personal…random things I really wanted to know!

1. If you could have a cheat day where you eat absolutely anything you want all day, what would you have?

Sweeties & chocolates!! We are laughing raucously as Richie and I discuss how ‘your grandmother was your first drug dealer’. For the nostalgia and endorphins, particularly as he expresses that he is still a fat kid at heart, marshmallows and banana foam would rule the day.

2. If you could get in a time machine and give a piece of advice to your younger self, what would it be?

He wishes that he had more knowledge about the structure of fitness. Finding it years later, and now almost 40, losing a lot of family members due to illnesses fuelled by being unhealthy saddens him. ‘No one taught them about diet and the importance it. If I could go back and do this, a lot of the people close to my heart would still be here today’.

3. If you could have a studio anywhere in the world, where would it be and why?

No way! There is me expecting something flamboyant like a beachfront or yacht but Richie would stay right here – in Fulham, Chelsea – for the people, and simply because ‘London is home’. The only other place would be NYC; back to the lower East Side. With the strong belief that you are a product of your environment, he hasn’t forgotten where he came from and would love to give back to the community that inspired him to be who he is today.

Mental Health – Pandemic and beyond.

A new chapter – How reading can enhance your life.

View all posts by Shabnam Choudhary →

One Comment on “Gloves Off – A conversation with a professional MMA fighter.”